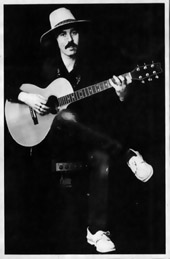 And then in '78: Whitesnake with old buddy David Coverdale. Moody envisioned Whitesnake as a twin guitar band along the lines of Allman Brothers - with himself on slide and with Bernie Marsden as the other guitarist. Photo to the right depicts a Whitesnake-era Moody pushing the Washburn guitar.

Moody left in '81 - too tired from all the late nights. When he returned later on in '83 it was a different band altogether, far from his vision... So he left again. 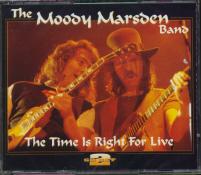 Mick Moody later on became one of the two masterminds of the bluesy Moody Marsden Band in company once again with guitarist Bernie Marsden. Issued double CD on CASTLE: "The Time Is Right For Live" (see cover pictured left).
In 1998 these two guys lead a band called (The Company Of) Snakes.

In the year of 2000 the first ever solo album by Mick was issued:
"I Eat Them For Breakfast" BLUE ARMADILLO ARMD 00006

I caught Mick Moody once in the late eighties (?) at the Half Moon Pub in Putney. Impressive. Superb blues playing - and almost unplugged as volume goes nowadays. A far cry from Whitesnake, I imagine.

The Company of Snakes
On the Road with David Coverdale - lots of Whitesnake info!
a page from Kathy's Zak Starkey Site: "The Moody Marsden Band"