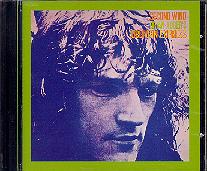 The man who played the harpsichord on the Yardbirds hit single "For Your Love"!
Which perhaps is not his main claim to fame after all...

5) And then in the late 70's Mr. Auger moved to California (San Rafael) and became a free agent, issuing solo albums and making occasional gigs/tours/albums with pure jazzers as well as with old buddies from the U.K. R&B scene:
Album with Chris Farlowe on vocals in '82.
Member of an '85 revival of The Spencer Davis Group.
Toured with Eric Burdon in '92.